Alpha is a musician, performance maker and visual artist. In 2015 she founded the collective PRAGMATA, which won the Zitty Berlin Award for the production Theaterautomat, listed in the top ten 2016 Berlin productions. She has also won the BE Festival Audience Award, UK (2016) and the Champ Libre Award, UK (2017). Kartsaki was a member of music ensembles 'my sister grenadine' and Phoneyisland Cabaret Orchestra and released her debut solo album in 2015. She has performed in Berliner Ensemble, Neuköllner Oper, HAU, Sophiensaele, amongst others. She co-curated the festival Klang der Dinge at the Schaubude Berlin in 2019. She has worked as an assistant director, production manager and stage manager at Neuköllner Oper and Volksbühne Berlin and has exhibited her drawings nationally and internationally. She has received large-scale commissions from Berliner Senat and Fonds Darstellende Künste. 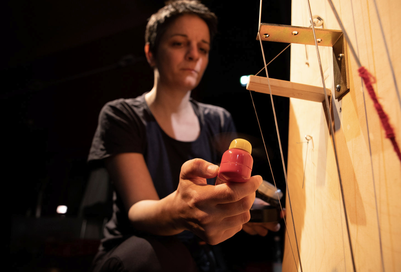